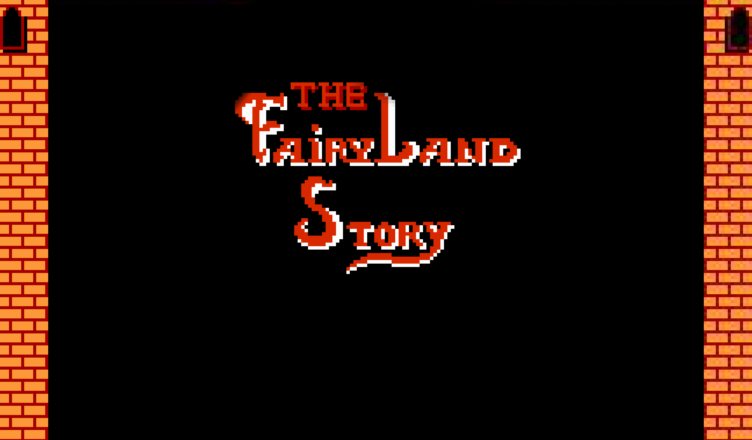 In collaboration with the fine folks over at Forest of Illusion and Hard4Games, Gaming Alexandria is proud to reveal a never-before-seen, unreleased port of The Fairyland Story for the Nintendo Famicom.

Released in arcades in 1985, The Fairyland Story is very much a predecessor to Taito’s other cutesy platform games like Bubble Bobble and The New Zealand Story. A Famicom port was developed in 1986 with Taito’s approval and as a relatively accurate port of the original arcade game. It made a brief appearance in Japanese magazines in March 1986 but was cancelled soon after and never heard from again.

This port was thought to be lost or, at best, in the hands of a Japanese collector. That was until 2022, when avid console modder FenrisWolfRetro found a copy of the game hiding in plain sight in an eBay lot of untested Famicom games. Doing some basic math, this one-of-a-kind prototype was bought for just over a dollar.

The cart is dated April 25th, 1986, and appears to be a debug build. The layouts are only rarely the same as the arcade original (even when they are matching, the enemies are often swapped). The arcade game ends at Level 101 with a boss fight; the Famicom port is never-ending, looping after Level 50. Pressing Select lets you skip around levels and – if overused – can result in some game-breaking fun.

This article will mainly focus on the history as Hard4Games has made a quality video above discussing the dumping process. We highly suggest you give it a watch!

There are no fairies in The Fairyland Story. You are Ptolemy, a young witch searching for the holy diamond stolen by the evil dragon/basilisk Dracolisk. Ptolemy is still a witch in training, and the only spell she can do is transform enemies into cakes. To survive, she can repeat the witchcraft until the enemies disappear or push their cake-covered bodies off a ledge.

The Fairyland Story was the brainchild of Hiroshi Tsujino (odten going by “Onijust”), a young game designer who worked for both Taito in Japan and Taito America. As a teen growing up in Takaoka, Japan, in the late-70s, Tsujino spent hours at the local supermarket playing Space Invaders and often hung around nearby arcades and computer stores. He became fascinated with video games, winning several game design contests in high school and eventually landing a job at Taito in 1983. Tsujino started in the MSX division, doing computer ports of arcade games like Elevator Action and Chack’n Pop and later an original title called XYZOLOG.

Shortly after the release of XYZOLOG, Taito decided to slow down MSX production in favour of the newly-released Nintendo Famicom, and Tsujino got transferred to their arcade division in Yokohama. Inspired by games like Namco’s Dig Dug and Brøderbund’s Apple II version of Lode Runner, he wrote a proposal for a single-screen platforming game with one key idea — crushing an enemy with cake. Taito loved the idea, and staff members like programmer Kazutomo Ishida came in to turn Tsujino’s design into The Fairyland Story.

The Fairyland Story was not a popular game compared to Taito’s next single-screen platformer Bubble Bobble, with ports which were few and far between. Hot-B published an MSX port under their GA夢 branding in 1987. The Nintendo Famicom port was announced in 1986 as a forthcoming title for the popular home console.

There is very little information regarding who developed the Famicom port of The Fairyland Story. It could be Taito, Hot-B, or even an unknown contractor. In 2003, an anonymous user going by “kiwi” hopped onto the 2chan imageboard, claiming to be one of the people behind both the Famicom and MSX conversions. They claimed that the Famicom port of The Fairyland Story was scrapped due to quality concerns and that the team moved on to the MSX version shortly after. This cannot be verified, but if it is true that means that either Taito or Hot-B handled the conversion.

To further understand what we had, we messaged video game researcher Calico to help search for clues in the ROM. Immediately, the game reminded Calico of another Taito Famicom title — Chack’n Pop, released in arcades in 1984. Comparing title screens, both ports have an identical font, copyright and similar HUDs. The sound drivers, although not a perfect match, both reference the same RAM addresses when writing to sound registers for SFX. There’s a good chance that the developer that converted Chack’n Pop to the Famicom is the same developer that would later do The Fairyland Story.

The Famicom port of Chack’n Pop was contracted out to TOSE. Although you may not be familiar with that name, you’ve almost certainly played at least one game developed by them. Founded in November 1979, TOSE has reportedly worked on over 2,200 games, going as far back as SNK’s arcade title Sasuke vs. Commander in 1980. TOSE did a couple of NES/Famicom games for Taito, including a version of Space Invaders and a tie-in for the 1988 film Akira. We have no information on who specifically at TOSE was involved in the port, as neither The Fairyland Story nor Chack’n Pop contain any credits, public or hidden.

Here is the part where things get weird. As many of you know, many archives from inside Nintendo were leaked onto the internet between 2020 and 2021. This “Gigaleak” gave us access to comprehensive spreadsheets from the Nintendo Lot Check. The Lot Check was a process that evaluated a game’s quality before manufacturing in the days of the Famicom and Nintendo Entertainment System. When a title receives the Nintendo Seal of Quality, it can make it onto store shelves. Using this information, we know that the American division of Hot-B submitted a finished NES version of The Fairyland Story to Nintendo in January of 1990.

In January of 1990. That is roughly four years after the Famicom port was cancelled. Even stranger, the game in the Lot Check is 48KB and uses CNROM, while our prototype is 24KB and uses NROM. At Nintendo of America, this mysterious second version of The Fairyland Story had the worst internal rating of any US NES game, going from 18/40 to a glamorous 16/40. For comparison, other games receiving that grade were Chubby Cherub, M.U.S.C.L.E., City Connection and Nintendo’s own Urban Champion.

This could be a situation similar to Taito’s Rainbow Islands where two different NES ports were made by separate developers — one for Japan and another for North America and Europe. Alternatively, since our prototype has only half of the levels of the arcade original, it might be that the game submitted to the Lot Check — which has double the PRG — is actually the same game with all 101 levels. Whatever the case is, we now know that there is an alternate, finished version of The Fairyland Story that remains lost. No screenshots or previews are known to exist of this version, and we have no information on whether a prototype still remains.

Maybe one day, the final version will be found within the archives of Hot-B or a Nintendo Game Counselor’s closet. Considering the high-profile stuff that has been found these past couple of years, it’s entirely plausible. The hunt will never end.

For now, please enjoy this early version of The Fairyland Story for the Nintendo Famicom!