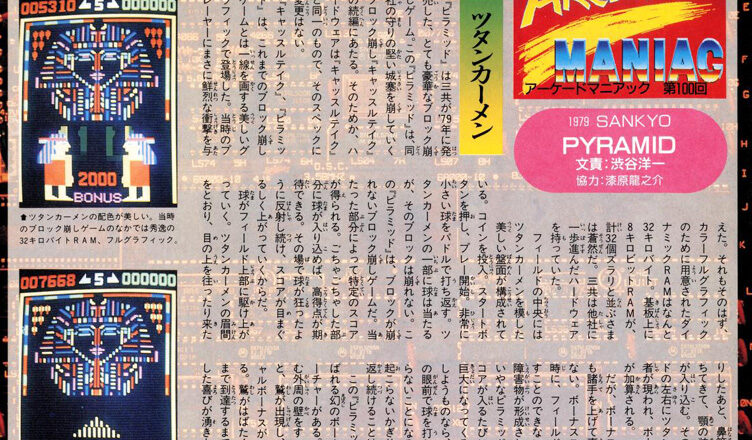 Magazine – Weekly Famitsu – No. 215 January 29th 1993 (page 108)
Article – Arcade Maniac No. 100 1979 SANKYO PYRAMID
Writer –  Yoichi Shibuya
Cooperation – Ryunosuke Urushihara
Article Translated to English by Tweakbod
Tutankhamen
Pyramid is an exceedingly extravagant block breaking game released by Sankyo in 1979. This Pyramid is the sequel to Castle Take, the company’s block breaking game in which players try to demolish a well-defended fortress. Probably because of this, the hardware is the same as Castle Take and its specifications are unchanged. Castle Take and Pyramid were introduced with beautiful graphics that set them apart from previous block breaking games. They had a tremendous impact on the players at the time, which isn’t surprising, as the dynamic RAM for the full-color graphics was a whopping 32 kilobytes. The 32 8-kilobit RAM chips lined up in rows on the board were a sight to behold. Sankyo had hardware that was one step ahead of the competition. A beautiful board surface imitating Tutankhamen is composed at the center of the field. Insert a coin. Press the start button to begin playing. Return the remarkably tiny ball with the paddle. The ball hits a part of Tutankhamen, but that block does not break. This Pyramid is a block breaker game where the blocks don’t break. A specific score is obtained depending on the part that was hit. If the ball gets into the jumbled-up section, you can expect a high score. This is because the score goes up at a dizzying rate when the ball is reflecting like crazy in that situation.
The ball races up to the top of the field. After passing between Tutankhamen’s eyebrows, and moving back and forth over his eyes, the ball drops down and passes through the bridge of his nose, and enters the decorative part of his chin. At that moment, King Tutankhamen’s servants appear on the left and right of the field, and a bonus score of 1,000 points is awarded. However, the bonus score does not mean that you can throw your hands up in the air and rejoice. This is because as soon as the bonus score is awarded, an unbreakable pyramid-shaped obstacle is formed in the lower part of the field. This annoying pyramid grows larger each time you get a bonus score, and the 2nd and 3rd tiers are huge. If it were to grow to 4 tiers, you would have to return the ball repeatedly from almost in front of the paddle. It would be impossible to keep hitting the ball back and forth without a series of miracles. This Pyramid has a phantom bonus score feature called an eagle. (Note – According to the play instructions on the flyer reverse, the birds are Hawks, not Eagles.) If you make all the perimeter walls surrounding the field glow red, an eagle will appear and a special bonus of 5,000 points is added to the score. The sight of the eagle flapping in the air brings a sense of joy that is in direct proportion to the suffering it takes to reach that point.
● The color scheme of Tutankhamen is beautiful. 32 kilobytes of RAM, and full graphics, which is excellent for a block-breaking game of the time.
● Each time you achieve a bonus score, a pyramid-shaped obstacle appears before your eyes. It is a difficult technique to return the ball that reflects immediately in front of you…

This is the 5000 point Hawk Bonus. The U-shaped perimeter wall surrounding Tutankhamen is made up of segments that change colors when hit by the ball. There is a sequence of 5 colors ending in red. So in order to get the Hawk Bonus you need the ball to hit every segment 5 times.

Every time you get the 1000 point bonus for dropping the ball down Tutankhamen’s nose and into his chin, a new section of pyramid is added to the bottom of the screen. This screenshot shows the full 4 tiers. The other bonus points such as when you hit all the cobras, probably also add tiers to the pyramid. 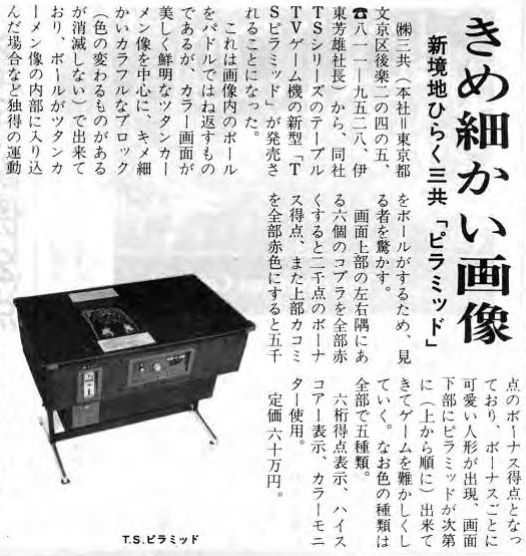 Magazine – Game Machine No. 129 – Oct. 15, 1979 (page 21)
Article – Sankyo’s Pyramid Breaks New Ground
Article Translated to English by Tweakbod
Sankyo Co., Ltd. (Headquarters = Koraku 2-4-5, Bunkyo-ku, Tokyo, 811-9528, President Yoshio Ito) will release TS Pyramid, a new model of the company’s TS series table TV game machine. The screen is made up of detailed, colorful blocks (some of which change color but do not disappear), centered on a beautiful and vivid image of Tutankhamen, and the ball is bounced at the image with a paddle, and when the ball enters the interior of the the image, it makes a unique motion that amazes the viewer. If you turn all six cobras in the upper left and right corners of the screen red, you will get a bonus score of 2,000 points, and if you make the upper enclosure box all red, you will get a bonus score of 5,000 points. Cute figures appear with each bonus, and a pyramid gradually forms at the bottom of the screen (from top to bottom), making the game more difficult. There are a total of five different colors. 6-digit score display, high score display, uses color monitor. List price: 600,000 yen.