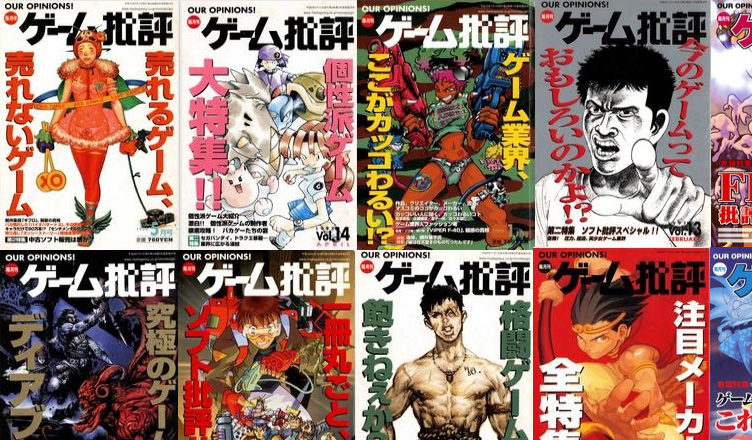 Gaming Alexandria recently acquired a large number of issues of the Japanese gaming magazines known as Game Hihyō (ゲーム批評, which translates to Game Criticism), thanks to Jonas Rosland. We’ve spent many hours over the last month scanning and going over them with the help of Oren Ronen who has helped greatly with translating information and articles about them. Much of the information we have is translated from Game Magazine Guidebook (ゲーム雑誌ガイドブック) by Sayakawa which was published by Game Lab/Sensai Books in 2019.  It can currently be purchased from Amazon Japan here.

We will continue to acquire and scan issues from Game Hihyō and get them to the Internet Archive for all to enjoy and research. There is an enormous amount of articles and great information contained within these that we can’t possibly cover in one article or get easily translated into English.

Please spread the word on these and share what you find, either via comments below, on Twitter, forums, etc. We want the world to see what fantastic treasures are there for all to enjoy. Please let us know via a tweet!

To see what we currently have scanned in high resolution, check out the collection on archive.org. 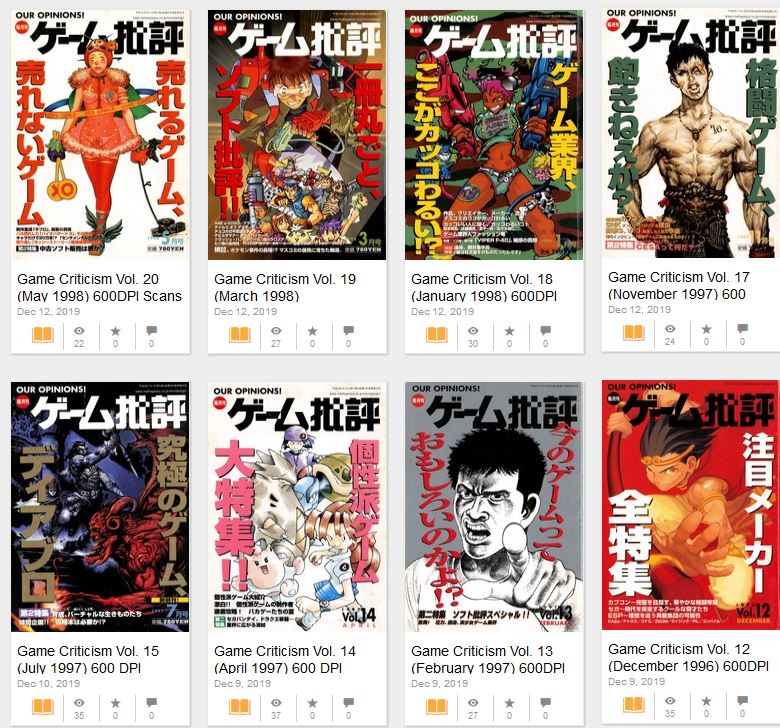 As we entered the 90s, hardware segregation increased and many game magazines that were on the market each took their own specialist route. One result from that trend was that magazines began to rely on companies for exclusive screenshots and pre-release software for their articles. This potential for conflict of interest eventually led to the staff of Game Criticism creating their own magazine, one that could be openly critical of video game companies, as they felt that being unable to criticize advertised games wasn’t a healthy publishing environment. Game Criticism’s mission statement — not publishing ads or taking money from game companies — was touted on both the front and the back of every issue.

The magazine’s main goal was to be a truly independent voice in the gaming magazine space. The “Criticism” in the magazine’s title meant, first and foremost, the ability to clearly declare whether games were good or bad, as well as the desire of the writers to write whatever they wanted. In addition, the magazine published without hesitation negative industry news articles (for example, reports on legal trouble), that were regarded as taboo subjects for regular game magazines. Eventually however, the magazine slowly and gradually changed its direction from these initial ideals which likely led to its eventual demise.

At the beginning of the magazine’s run, it gallantly printed responses from people involved with the companies attacked in their harsh articles, and let the readers decide who was in the right. For example, in the first issue the main feature argued that games with fantasy settings were in a rut, and the second issue argued that the popularity of fighting games post Street Fighter II resulted in a saturated market. In its third issue a critical response from famous Sega PR executive Tadashi Takezaki, arguing that if there are people out there who enjoy playing these games, it’s not OK to write articles that demean them. He also admonished the magazine for publishing stories that sometimes ridiculed people.

While this style seemed to cause a stir in the game industry, it also wasn’t rare for opinion magazines in other genres to make fun of their subjects. Game Criticism was not created to publish run-of-the-mill critical articles after all, and with time it shifted to playful articles laughing at, but also showing affection for particularly bad games (kusoge) and intentionally silly games. These articles were popular, and in the end led to the birth of magazines like Used Games (now Game Side) and Nice Games.

As the magazine continued, its selling point was narrowed down to articles that thoroughly dug deep into various subjects. These were well crafted articles, but strayed from the magazine’s initial concept. Its articles about game industry trends also shifted from zeroing in on industry gossip to more serious topics such as “games and copyright” and “games and violent crimes”.

While these articles were well written, Game Criticism could be seen as becoming more mainstream and similar to regular industry magazines. The magazine’s radicalism and sharpness gradually eased up. Eventually the magazine stopped printing its mission statement on the front of the issues, and strayed further away from its original concept. Printed articles that questioned the media’s duties and the nature of game criticism which were there from the beginning disappeared.

In Vol. 33 the magazine changed its stance on promotional material and started printing ads that were not related to games. This only increased as time went on, and in 2006 it opened itself to game ads when it reinvented itself as a general game magazine. That reinvention was successfully executed for a time, but after a period it became clear the magazine was a mess of articles aimed at light users mixed with its former enthusiast articles, and was eventually cancelled.

The last issue’s main feature was about, of all things, World Cup soccer and completely unrelated to video games. When examining its 12 year history, one can see how a gradual loosening of ideals and concepts led to the magazine’s eventual demise. In any case, the search for innovation in critical game magazines was over for a while.

Many talented artists created beautiful cover art for the magazines all the way up until the mid 2000s, which was when the magazine started introducing ads. This seems to coincide when the magazine arguably started its demise and the covers got more and more generic. That being said, there is some gorgeous artwork on the covers up until this point including artists such as Yoshitaka Amano, Kei Toume, Shinichi Morioka, and many more. They were also interviewed within each issue as well.

Manga comics were also included within various issues and there were some series that continue through multiple issues as well. Fan artwork was also included in most issues, and a few examples depicting Pikachu, Boogerman, and the Atari Lynx can be seen below.

Interestingly there are various famous guest columnists that contributed throughout the magazine’s run on all sorts of subjects. Notably Hideo Kojima wrote a column for many of the early issues called Kojima Cinema in which he discussed movies. Yoji Shinkawa, famous for his art for Kojima’s Metal Gear series, also created artwork in his signature style for this column of various actors and movies. Big thanks to @Arc_Hound who recently found this great Nicholas Cage art in Vol. 25, as you can see below. Another columnist was the late Kenji Eno who had one in the earlier issues  and maintained a strong relationship with the magazine afterwards. There’s even a famous interview between Eno and Shigeru Miyamoto published in a mini book by Game Criticism in which Eno gives a harsh criticism to Miyamoto’s face. You can check out that issue here. For a magazine that prided itself on independence from influence of game publishers and designers you have to wonder if they were able to truly accomplish that when they gave certain designers their own columns.

We hope you enjoy these magazines! If you want to dig into more details about Game Criticism, you can always start with their Japanese Wikipedia page.