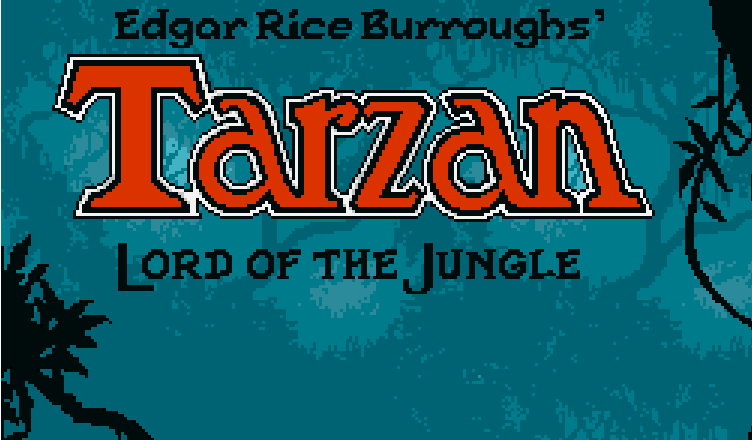 After years of only seeing a few screenshots of the game, the unreleased Tarzan: Lord of the Jungle for the SNES is now finally available. This ROM came directly from Jim Grundell, the programmer who lead the project during development.

There are two ROMs of Tarzan, one using original code, and one including a button fix (read more about that below). Both can be downloaded here. We are also sharing the original source files and graphic files converted to a more modern format.

External Internet Archive Link with All the Above

Tarzan: Lord of the Jungle was a planned title to be published by GameTek. Based on the fictional character by Edgar Rice Burroughs, the game was slated for a 1994 release date alongside versions for the Game Boy and Sega Game Gear. As we can read from a document dated July of 1993 (see above), the game was designed as “a multi-level side-scrolling action game,” where Tarzan must overcome obstacles to rescue Jane from the African jungle.

GameTek contracted Seattle-based developer Manley & Associates (now known as Electronic Arts Seattle) to develop the SNES version, with Jim Grundell heading the project with a team of around eleven people.

“The game was playable, it didn’t have any bugs, but I don’t think it had a lot of content,” Grundell tells me via email. “I can only remember 2 or 3 distinct levels and a few cutscenes, but there may have been more. I’m not sure if the design was complete as we just had a few levels to work with.”

[Note: Manley & Associates had no involvement whatsoever with the released Game Boy and Game Gear ports, which were instead handled by Eurocom Developments.]

While the game may lack originality in its design, the visuals stand out. Jim Bradrick, an animator best known for his work at Humongous Entertainment, was hired on as director for the animation. For a SNES game developed in 1993, the animation is incredibly smooth –  it looks almost rotoscoped.

“I had been out of any art jobs for a while when Manley hired me as a background artist,” Jim Bradrick recalls. “It was weird doing chunky art like that, always with limited palettes and usually with tiling to save on precious computer memory.”

“Then when a version of Pitfall* was released with an attempt at decent animation, and then Jungle Book, suddenly everybody wanted good animation, and there I was—an experienced animator. So I did just about all the animation for Tarzan, as I recall, but still it was very low rez, so his head had like eight pixels, very abstract—you couldn’t draw a nose or eyes, but you could suggest shadowed areas where a nose or eye socket might be.“

[Note: Pitfall: The Mayan Adventure was released in 1994 but was previewed in 1993 so could have been the inspiration for the project’s animation style]

Tarzan was canned for multiple reasons, ranging from the usual to the unusual. It was developed as a game with no prototyping and very little iteration or rework on the design side, making the overall control of Tarzan awkward and unresponsive.

In the words of the assistant programmer James Hague, “It had some great visuals, but wasn’t very good as game.”

One of the stranger reasons of cancellation had to do with the subject matter. In the game Tarzan kills many different animals with a knife, which was something GameTek did not appreciate in terms of it’s violent depiction.

Clayton Kauzlaric, the lead background artist on Tarzan, goes more in-depth on this in a 2006 blog post. “The game’s cancellation may have been related to the way good ol’ Tarzan methodically slaughters his way through the endangered species list over the course of the game,” says Clayton. “The fact that doing so wasn’t even fun just sealed the deal.”

At one point during development, Manley had attempted a work-around for this – changing the plot so the animals are “magic” with their death animations replaced with smoke puffs. Needless to say it didn’t go well either.

Tarzan would be cancelled around late 1994 after a few trade show appearances. A Genesis version was also rumoured to be in development, however reports from former GameTek staff likely disprove it.

So how exactly did we get the ROMs working? Jim sent us source code from 1993, which makes use of an assembler that we didn’t have access to. To get around this, we contacted programming expertise Rich Whitehouse to help analyze it.

Rich ultimately conducted that  “it came with pre-built object files, so I’ve actually just reverse engineered the simple format used in the object files, piled them into a binary using the correct bank/address locations, and generated a proper(-ish) header.”

Update: The above has been corrected by Rich:

The “btnfix” ROM shouldn’t actually be necessary at all – it’s a jmp hack to get around a bsnes issue, but that issue was already fixed in bsnes too. I happened to have a pretty old version on my laptop, where I was testing the ROM. So TL;DR is, use the unpatched ROM I compiled.

Examples Of Some Of The GIF Animations –

2 thoughts on “Tarzan: Lord of the Jungle (SNES, Unreleased)”