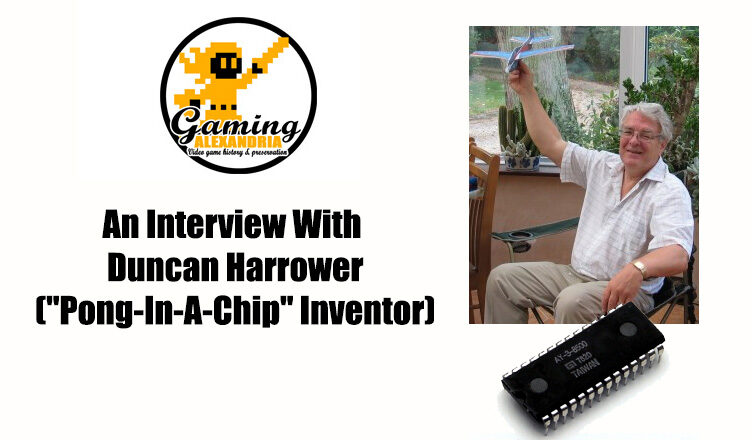 Today’s article will be a little different, as we are republishing an interview conducted by our good buddy — “friend of the site,” if you will — Nathaniel Lockhart. In addition to being the first member of Gaming Alexandria Patreon, Lockhart is an active researcher in our community, pumping out some excellent work regarding the history of early video games. Lockhart is also the host of The Memory Machine, described on its official website as a “historical, anecdotal, and [pop]cultural” podcast.

Here is an interview with Duncan Harrower — the inventor of the AY-3-8500 “Ball & Paddle” chip back in 1976. It was first published on January 25th, 2019, on The Geekiverse but has since been deleted. It has been slightly edited for improved readability.

In the mid-1970s, video games were a nascent arcade novelty, kept mostly in the confines of the neighborhood bar, rec center or arcade.

The first major attempt to bring the video games home, Magnavox’s Odyssey in 1972, was a bit of a dud, due mostly to the fact that video games were so new, and consumers didn’t know what to make of the concept.

But by 1975, the public had become familiar enough with TV games that the market was deemed ready to play the games at home. Atari was first to the market with their home version of Pong (through Sears) and was an instant success. Naturally, other electronics and toy companies were interested in releasing their own home video game, but how do you do that when you don’t have a dedicated “home video game department”?

Enter General Instrument. General Instrument was an electronics company that manufactured electronic components for all sorts of consumer electronics: radios, calculators, televisions, and so on. As Harrower goes on to explain, it was brought to their attention that it might be a good idea to invest resources into developing solutions for the new TV games and that it might attract potential business partners.

Engineer Gilbert Duncan Harrower (or Duncan Harrower, as he prefers to go by) and his assistants managed to distill what originally took 66 logic chips into a single, low-cost IC. The extent to which this invention attracted business partners was staggering. After the introduction of the AY-3-8500 Ball & Paddle chip (as it came to be called) in 1976, it was used in dozens of machines released by dozens of companies, including Coleco, Radio Shack, APF, Philips, even Magnavox and Atari. Per Harrower, general manager Ed Sack stated in a memo that 15 million chips had been sold in the first year.

Early last autumn I was able to come in contact with AY-3-8500 inventor Duncan Harrower and ask him some questions about his background in electronics and his pioneering creation.

DH – There are three parts to this.

My maternal Grandfather was a technically curious and capable guy. He worked as a linesman with the railways and was never out of his shed making different things. I was told that he had the first radio in the town but I never heard a date for this. My brother was seriously handicapped but with my grandfather, we installed an engine and gearbox into a large pedal car so my brother could “drive” around. Between us, we dabbled in a lot of different creations.

One of my uncles was with the RAF and did a lot of rewiring work and woodwork. With his support, we identified things we wanted done and figured out solutions to just about any practical problem.

My Dad fits in here because as I was considering what course to take at college. My Dad got a quality newspaper on a Saturday when it had a lot of features. I had been reading some magazines such as Practical Mechanics and Popular Electronics (may have got the names wrong) and was building a sense of what was going on in the technical world. I selected an electrical/electronics course at Strathclyde University in Glasgow. Towards the end of the course, my Dad’s newspaper had an article about a company, Elliott Automation, who were building some of the very new logic gate products and I thought I’ll contact them and find out if there are any jobs.

With General Instrument I got wide exposure to the capabilities of these early integrated circuits.

NL – Can you explain a little more what GIANT was?

DH – GIANT was General Instrument Advanced Nitride Technology. MOS transistors of the time used silicon dioxide as the gate insulation layer. This design needed quite a high voltage on the gate to get any conduction across the device. General Instrument had found that building a sandwich of silicon dioxide and silicon nitride as the insulation layer allowed a big drop in the gate voltage required to switch the MOS device into the conducting state. The voltage was low enough to accept the output of TTL logic to directly interface with MOS integrated circuits. We still needed a high supply voltage (12 volt) but could accept the 3.5 volt or so TTL input signals.

DH – As far as I can remember this was 1974, may have started in 1973.  I had been involved with TV remote control chips, so had exposure to the technology of televisions. A man I remember as Chris Carey came to General Instrument in Glenrothes, Scotland and talked to the management about something he had seen in the United States. These were the “tennis” machines he had seen in a bar. I was involved in the discussion and management asked me if it was possible to design a chip solution to put “tennis” on domestic televisions.

General Instrument was unwilling at this time to put any resources into the development but I offered to do it in my own time because I was interested in the idea. Along with my great assistant, Dave Coutts, we set about trying to figure out how we could build something. Once we had a basic design up and running, the management took a lot of interest and started talking about the development to potential customers.  Through various inputs we were asked to do several games including a one-person practice game. We were also asked if we could add “English” to the redirection of the ball. This was really “spin” as we know it today and involved dividing up the bats, so if you hit on the edge the ball would go at a steeper angle.

The chip was produced and sold to several customers. I remember visiting Fortunoff’s in Westbury, Long Island, New York and they had a whole floor dedicated to displaying and selling machines based on the chip.

NL – What was the biggest challenge in the development of the chip?

DH – MOS chips of this era were amazing but the transistor count was nothing like we experience today.  I think the most complex chip at this time had around 3,000 transistors but the manufacturing yield at that complexity and chip size was limiting and costly.  I think the 8500 had around a thousand transistors. The biggest challenge, therefore, was to provide rich function with minimum use of silicon. The circuit basically had to count vertical and horizontal synchronization for televisions and in parallel count in greater or lesser numbers to guide the “ball” left and right and up and down. It would seem obvious to have a CPU and a simple program to do this but it would never fit on a chip that was economical to produce at that time. The answer was to use a shift register, with D type flip flops, which could count by the binary equivalent of the number of shift cells. Thus an 8-bit shift register could count to 256. Circuitry around the shift register to “add one ” or “subtract one”  was used to create the four counters in a very compact space.

NL – So the 8500 is basically a TV Tennis-specific 8-bit computer processor that you designed from scratch that works without RAM or ROM. Am I understanding that correctly? Is that an appropriate way to simplify the chip’s workings?

DH – The 8500 was a special design of hard-wired logic, it bore no relationship to a programmable device. It did count, but that was in the unique use of shift register bits to apparently count in a binary sequence and use hard logic to test for specific binary patterns, e.g. where to position the “court” lines or where to position the “bats” and score patterns.  Equally, some frequencies that were being created by the repetitive counting was selected for the sounds of a “ball” hitting the “bat” or being missed.

NL – What other noteworthy projects did you work on, game or otherwise, that you think we should know about?

DH – Another significant product I was closely involved with was the Mattel Intellivision. It’s a long story but from my work on the development of microprocessors and my previous 8500 game work I was employed as the lead architect for the system design of the hardware that became the Mattel Intellivision.  This centered around a STIC chip, Standard Television Interface Circuit, and used the CP1600 16 bit microprocessor along with a bunch of other specialized chips. Steve Maine and Eric Bergman were the lead creators of the STIC chip. I worked closely with them and many others to design the hardware that was bought by Mattel. Working on this system lead to my family and myself enjoying eight years living in Long Island, New York.

An interesting time, but crikey has the world moved on.

DH – The follow-ups were done by a different group in General Instrument. The main team was led by Steve Maine and included Don Butler and Ken Naiff. They were located in the South of England, I did visit them but I was not involved in gaming at that time. The follow-ups were nowhere near as successful as the original 8500.

NL – What do you think of how far video games have come since your involvement in the 70s and 80s? Do they still interest you? What are you impressed or not impressed by?

DH – Video games have come on unbelievably in the many years that have passed. My main impression is how controllers have vastly improved. Video was always going to improve with the architecture of graphics chips but it is truly amazing how realistic the screen images have become. I’m surprised virtual reality has not impacted gaming so much. It would look fabulous in a car racing game or a war game but maybe you need the physical input of tossing around in a hydraulic chamber to really get the effect.

Special thanks go to Kevin Bunch, Kevin Savetz, and Ethan Johnson for their help with this interview. And of course, Duncan Harrower for graciously answering all my emails.

View all posts by Nathaniel Lockhart →