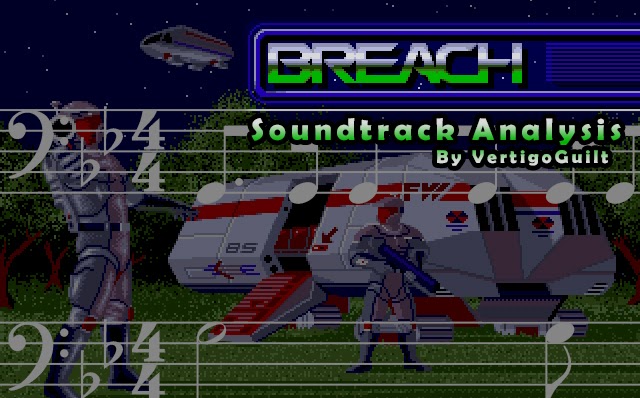 The original Breach was released for the Commodore Amiga in 1987, and the port for Sega Genesis was created in 1992. American Sammy was to release the game and at least three individuals made up the team: David Ashley, Paul Drzewieck and an unknown composer (who Ashley could not remember the name of).

The unknown composer created four tracks for the Breach OST, and we’ll dive deeper into how they were structured, as well as providing sheet music and midi files for each one.

The OST is short for a Genesis game, most likely because the game was never released. What makes the music so good though is that they are a mysterious mix of genres, just like the composer! The tracks remind me of cliché science fiction movies, because of the “dark and mysterious” sound.

The original game was launched in the late 80’s when electronic music was very popular, so the composer likely took inspiration from various styles of EM using synthesizers and modulation.

The intro song is in the key of G minor. The scale was a little confusing to determine, because some weird shifts happen without a change in harmony. One thing we can look at to determine the scale is the bass. The bass is in harmonic minor scale, and as the base instrument the other instruments should be following the same scale. The 7º note in the scale is sharp (F#), so we can determine the key as Gm. Here is the bass on the score for better look:

The “confusing” part in the lead melody is that it uses the tonic note with sharp (a 2º minor note, G#/Ab), and it also uses the 4º augmented (C#). Both of these notes are normally out of the scale. Here you can see these notes at work:

We can consider this melody slightly “atonal” since it runs off the scale.

But the cherry on top is that the composer jumps one sixteenth note, completely changing the time signature. The time signature was 4/4 before, and after this note jump it became 15/16.

The change in time signature was necessary because we don’t have proper notation in the sheet music to jump a bar. The bar in a song must be completed, and if it isn’t the composition of the music is incorrect.

Even with this unusual time signature change, the song is a good introduction to the game, reminiscent of that old sci-fi style and early synthesizer music.

The second track from the Breach OST plays when your character dies. The song is in the key of C minor, and the style of it reminds me of a song from Kraftwerk: “Showroom Dummies”.

While the third track sounds more upbeat, it still follows the dark sci-fi style. It might have been planned to be used during the credits, though it’s currently not implemented in the game.

The track is in the key of G major and has some notes off the scale, but not nearly as many as the other tracks we’ve examined. The out of scale note that happens here is in the bass track, which has a minor seventh (F). One interesting thing about this is that the arpeggio is playing a seventh major note (F#), which gives us a tritone interval (also called the “Devil’s interval”), which can make the track sound rather tense at points.

In the arpeggio (which are chords played note by note), the composer suspended the fifth in the first bar, and suspended the third in all other chords. Since they removed the third in most of the chords, the chord isn’t defined as a major or minor either, it’s just the chord name and suspended as a suffix. The cadence that he uses is I – II – III – IV, which isn’t very common in popular music. When the chord gets tense from the subdominants, the third note makes a way for the fourth, and then comes back to the key to relax.

The last track is a triumphant one, and has more chords than the other songs on the soundtrack. This song is in the key of Gm with a natural minor scale. One of the most interesting pieces here is the chord sequence on the “chorus”. The cadence is I – VII – VI – V. This sequence is known as “andalusian cadence”, commonly used in Flamenco music, and the progression appears to be based on a major scale. What makes it different here is the V dominant chord. Looking at the minor harmonic field, the V is a minor, but replacing a major with the seventh makes the dominant chord much stronger. The tension maintains itself when it returns to the I chord. 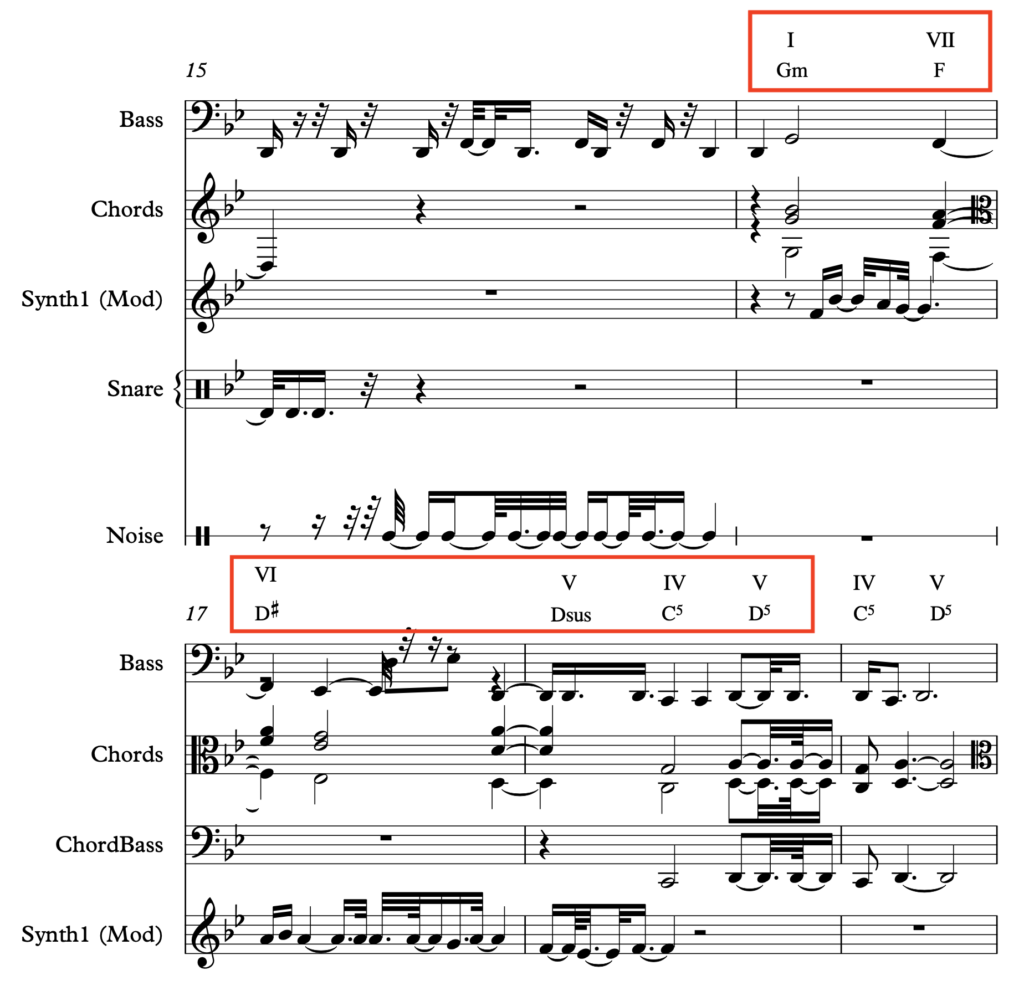 If the game had been released we would have more material to analyze, but I am impressed by the complexity of the tracks it has for an early prototype.

The Breach soundtrack could have given the right atmosphere for the game, with a futuristic and darker sound, exactly what a sci-fi game like this needs. The soundtrack shows us new elements to work with, breaking the habits that you might have learnt in music class. An unreleased game that has such a distinct sound isn’t something you see every day.

Hi! My name is Enzo Maida, but here on the internet people call me Guilt. I’m am a musician helping out here on various projects.

View all posts by Enzo Maida →