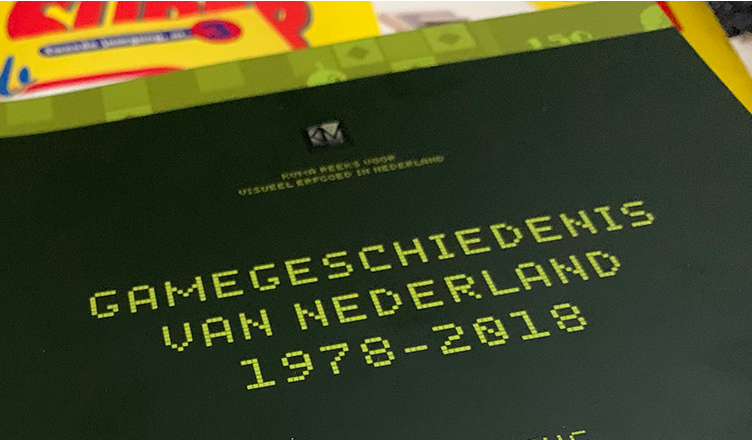 [This book was provided to the author of this article for review by the publisher. The book is also entirely in Dutch so you won’t be able to read it unless you spreek Nederlands, but Gaming Alexandria aims to promote game history from all cultures and therefore have provided a translated version of the original review.]

Two weeks ago I was pleasantly surprised by the announcement that Tom Lenting had written a book about the development of games and the game industry in the Netherlands. I fully agree with the reasoning behind writing this book. A lot of game history work has been written about other international regions, but almost never from a Dutch perspective. A good overview of the development of this industry in the Netherlands is lacking. And that is unfortunate: In every country the progression is different and those differences matter. This book by Lenting is therefore also an important contribution to research into the game history of the Netherlands

The content of this book is based on research from existing sources in magazines and other texts. Lenting has brought together these bits of information to form an overview of the intriguing tale of Dutch game development and industry. The early history, beginning in the 70s, followed by the arrival of home computers. Later tackling hobbyist programmers, the demo scene, and the companies that result from it. A number of internationally renowned companies – most prominently the role of Philips – Dutch publishers, serious games, early smartphone games, casual games, as well indie games, so it includes recent history too. All of this is covered in around 80 pages (not including notes, sources, and the bibliography).

So now there is finally an accessible overview of games, companies, and hardware which were important in the Netherlands. It’s super nice that such a history now exists that it is accessible and bundled in one book. I am very grateful to Tom for his work. After the publication of this book, how much is there left to say or investigate? Has the definitive history of Dutch gaming been told? Certainly not. The book is a foundational work which will serve as a source to tell even more stories.

In the afterword, Lenting writes: “I do not pretend that this history is complete: this book can be seen as a standard work with the main lines of Dutch game history, from which future researchers can continue to work.” The book absolutely succeeds in this mission. It provides a global overview that helps to understand game development in the Netherlands, and encourages you to delve further into the subject if you are interested.

What I personally found most interesting to read were the chapters that described the earliest development of games in this country, and the combination of serious/educational and entertainment games. It describes small, obscure developers who found a platform on home computers to express their creativity in making games, and some eventually become serious companies.

It’s also nice that – in addition to the games, the people, and the companies that make them – you also get to read about cultural touchstones like magazines and computer clubs for example. This provides insight into how this new medium was brought to the attention of the general public. Lenting writes about the Microcomputer Club Nederland. This club was created by Vendex, a company known for the now defunct department store chain Vroom & Dreesman among others, which played a stimulating role in helping computer games blossom here. He also describes how games were used in Dutch television programs. Such anecdotes certainly made me interested to delve deeper into these aspects of our culture.

I do sometimes feel that game history in other countries gets incorrectly slapped onto the Dutch context. I was pleased to see that the author also spent some time describing how the North American Video Game Crash of 1983 did not directly affect the Netherlands. Of course, we did have issues with developers and publishing a good amount of cheap, uninnovative “copies” of popular games, but there was no serious crash in this country as in the United States.

The Role of Philips

Philips appears in in the book at several points, from the very beginning of their involvement with gaming to the 90s with the Philips CD-i. The book provides a global overview of the development of CD-i and it’s few games. Of course, the entire affair with Nintendo and Sony is also discussed. This book goes into more detail on the CD-i and especially the developers who worked on it than any other Philips related book I have read so far.

My hope is that we can continue to learn more about Philips in the future than is currently available, as Lenting was only able to use limited information from which to base his coverage in the book. For example, in the recent biography of Jan Timmer (president of Philips during the release of the system), there were only a few lines in the book about the CD-i. Amazingly little for an important piece of history of this important company.

The Game History of the Netherlands Before Philips

There is very little in the book to be found about the history of games in the Netherlands before 1978, the year that the Videopac G7000 (the European version of the Magnavox Odyssey 2) from Philips came on the market. There is certainly more to say about the early history of video games in the Nethelrands prior to the advent of home computers and gaming consoles came in force. Numerous home Pong machines, for instance, were available in the mid-1970s. Only Telespel from Philips is mentioned, but at least one other native company called Schrader Electronica in Amsterdam was distributing pong machines before Philips did.

Another aspect that does not really get discussed are companies that are involved in importing arcade games and operating arcade halls in the Netherlands. Companies such as Hommerson have a rich and long history that goes back 100 years, from Luna Parks to arcade halls in the the Hague region. You can debate whether you can see these types of companies as part of the traditional game industry, but they certainly had an undeniable role in introducing games to the Netherlands. These topics interest me a lot, and there is very little that is known about the role of arcade games in the country, so there is definitely still new territory to conquer in describing our history.

A Standard Work for the History of Games in the Netherlands

For anyone who is interested in game history from a Dutch perspective, I highly recommend this book. The book shows that the Netherlands has an interesting history which sets it apart from other countries with it’s own unique contributions. It will hopefully also be a source of inspiration for the Dutch game industry itself. I hope the book will stimulate even more people to explore and publish about our rich gaming heritage.

The publisher provided a copy of the book for this review.

Can be ordered direct via the author’s email at karelvanmanderacademy(at)outlook.com

[Edited from the original by Ethan Johnson.]

View all posts by Densy →